[solved] TeamSpeak Client does not start on Linux

I’m using an NVIDIA GPU + AMD CPU and I’ve got a similar result on Kubuntu 20.04 with Kernel 5.4.0. It seems to be a problem in the fresh build. Older Builds that were updated seems to work.

Maybe someone can send a version that works.

So, from what I can read, we have following (sorry just in case for ”@-ing” everybody):

What if, just if, there is a problem with Chromium on CPUs with integrated GPU? But problem with that is there is one example of iGPU working, so that theory falls apart.

Sorry for double post, but ”@-ing” more than 10 people gives an error.

@TS.ChrisR, is anybody from Staff reading this thread? Simple answer will probably be enough for now, I think.

EDIT: I see you liked it, so someone is alive here after all. That’s a relief.

What if, just if, there is a problem with Chromium on CPUs with integrated GPU? But problem with that is there is one example of iGPU working, so that theory falls apart.

At least it’s not exclusively related to iGPUs being present, as I can’t run it with no iGPU in my processor whatsoever.

To confirm, not working for me.
Fails with all the following flags:

The GTX 1080 (and 1080 TI) I think are the ones having trouble in general. That’s on nvidia though.
For this it should be enough to start TeamSpeak using --no-sandbox.

If the error persists it might be related to this mysterious problem discussed here.
For those that it’s not working, have you tried launching chromium itself?
If this does not work either this discussion should maybe discussed on the chromium forum.
Chromium itself (at least version 87.0.4280.88) works even when TeamSpeak does not.

For those that it’s not working, have you tried launching chromium itself?

Yeah I’ve testet it too :D.
My specs are:

Same result as before: 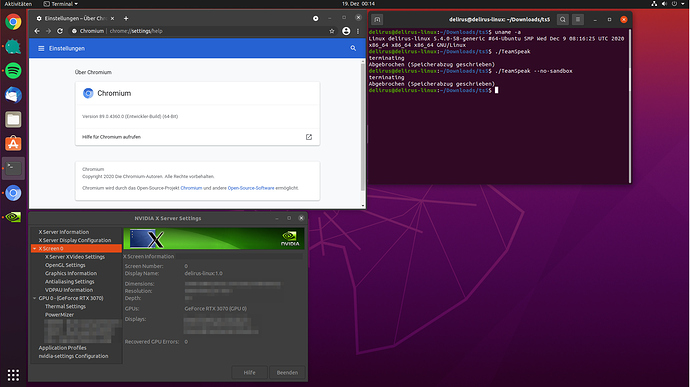 So far Teamspeak is the only application refusing to work at all. Anything else works fine for at least two years with that GPU. This includes (heavy) gaming, chromium/google chrome (or anything else chromium based), video playback, electron apps and anything else I can think of that makes use of GPUs.

For this it should be enough to start TeamSpeak using --no-sandbox .

Using any of the mentioned ways of starting teamspeak in this thread do not work for me.
This is likely a general incompatibility of Teamspeak with nvidia drivers, but certainly not exclusive to the GTX1080 (which by all means are solid card, even on linux.).

Also as already mentioned, I tried all available driver versions, old and new. On 3 different machines with 3 diffrent nvidia GPUs (540m, GTX770, GTX1080). On every single one Teamspeak is immediately crashing on start.

This is really weird. It is known that a GTX 1080 might cause problems (I have to agree though that it is a really solid card).
But I really had to go out of my way to find a combination that is not working.
All the distros / drivers I normally use worked out of the box for me.

Try with the following before running the client.

This has fixed my problem. Thanks!

Wow, THANK YOU! This fixed it for me too …
How did you manage to stumble across this?

It’s nice hearing that problem is going away.

But there’s still one problem…

Why isn’t this folder created automatically and need all of this to work? It shouldn’t be like that after all.

This really worked. Thanks a lot… Amazing what a missing folder can do…
The Teamspeak Team probably just has to do a very little fix. I hope they fix it asap (but enjoy your christmas time

Getting a clean install of PopOS and trying to start ts5 it will crash instantly.
After some googling I found that this is the solution.
Would be great if it could get fixed in some way.

Thank you all for the reports and the solution!
The next client Beta38 will add a fix.

Then just make sure to update the installer/download on the beta page to that version.

Try with the following before running the client.

Thanks, this works for me too. I hope they’ll update the download page soon.