Strange Admin on the Public Teamspeak?

Hello how are you guys,I have been concerned with this question since today.Who is this Stranger Admin on the Public Teamspeak? Is this a Developer or a Technical Stuff or whatever. I Ask this because this guy is since 7 years on the Public and i dont know him or any kind of informations.

i got inspired by @Cornelius

Which Public Teamspeak do you mean? Do you talk about voice.teamspeak.com ? Well this server is kinda dead.
No idea who’s running this server at the moment, the only thing I know that this server is only used for demonstration purposes… I guess the admins there are pretty strange, because they’re keeping themselves secret or hidden.

There’s a mysterious person behind this server.

Next to the public server, there’s also an official community server which is administered by numerous volunteers which are also not employees of TeamSpeak Systems GmbH. (51.68.181.92:9988)

At first, why did you mention me? We hadn’t and we will never have anything to do with each other…

Anyway I think admins off the Official TeamSpeak Public Test / Community Server will never be unmasked.

But as I see that servers are currently online since 3 hours, I would guess the “strange” admin is an employee of TeamSpeak Systems and has updated the servers.

After all as @MCG said, it’s still a mystery.

I hope the Official Public Community Server will have more users in the Future. : D

I hope the Official Public Community Server will have more users in the Future. : D

It should be added here

If it’s an official server.

This is the TeamSpeak Public Test Server and he is a official Server from TeamSpeak.
If you connected to this Server, you will see a placeholder with the Name: “Visit our Community Server”
I mean this Server.

Wouldn’t it be a great idea to revive the public test server? 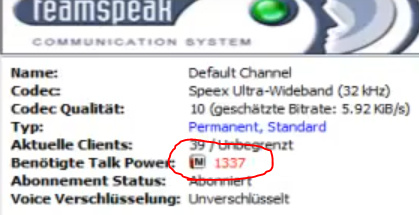 I missed the Old Time on the Public