Text chat portion of TS5 is a yikes

text chat portion of TS5 is currently pretty rough.
crucify me if you please but i want something close to a 1:1 of the way that discordd does text chat, they really really shine in that area in my opinion.

Please remember that TS5 is in closed beta which means not everything is final and everything might change in future.

…depends on what idea TS Devs have.

Chat improvements and moderation tools are work in progress.
Give it some time till it goes lives.

The general comparison to be like Discord isn’t useful anyways.

It’s ugly style and the unnecessary and childish reactions/emoticons are crap. (to call 2 examples only)
I hope this shit as it is in my opinion will never find it’s way into TeamSpeak.

yes, a closed beta which i am a part of. posting my feedback here in the feedback section.

and to whoever from the staff team ends up reviewing this because someone decided to cry and flag an opinion/feedback post as offensive, i hope you let the conversation happen.

nothing in my original post meets these criteria:
“offensive, abusive, or a violation of community guidelines”

not sure how much experience you have with the current implementation of chat in TS5 but it currently has the same base emojis as the service you seem to have a personal issue with.
irrelevant to what id like to see changed about TS5 chat either way, not sure where you got the subject of emojis from, certainly wasn’t my post.

the improvements id like to see are more intuitive/feature rich text channels, similar to the competitor discussed above.

the groups i play with use this to great effect for most games we play.
a large number of us are looking for an alternative to that service but with the current chat system in TS5 the move over here just isnt gonna happen.

Hopefully this area of TS5 gets some thought and TLC from the dev team as the beta phase progresses.

side note: kinda silly that a post can be flagged/hidden for absolutely no good reason simply because a couple people dont agree with suggestions that would be completely optional, while on the feedback section of the forums.

calling my OP here ’ offensive, abusive, or a violation of community guidelines’ is gratuitous abuse of the flag system.

I am wondering about this, too.

how much experience you have with the current implementation of chat

I am using and testing the closed BETA since it’s release.
I am familiar with the chat as well as the implemented features and issues it (still) has.

It’s moving forward in a nice direction.
And as I said general improvements and moderation tools are WIP.

i want something close to a 1:1 of the way that discordd does text chat

I don’t see any kind of critic or a suggestion what TeamSpeak could do better or what’s wrong with the current (unfinished) version of the chat module.

I mean the chat supports markdown as well as BBCode (for now), website-, image- and videopreviews,
quote- and codetags, the ability to change it’s “style”, in-text emoticons etc.
That’s what Discord and similar (modern) chats can do, too.

I mean don’t get me wrong, that’s meaningless.

it currently has the same base emojis

I don’t wan’t to quote myself but I was obviously speaking about chat reactions with emoticons. 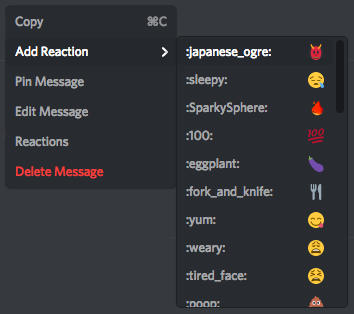 That’s the ugly, unnecessary and childish crap I was talking about.
(just to mention 1 example only - TeamSpeak primary (still) is a voice platform)

and to whoever from the staff team ends up reviewing this because someone decided to cry and flag an opinion/feedback post as offensive, i hope you let the conversation happen.

If enough people flag a post it’ll get automatically hidden. And it usually stays that way until we have a chance to review it.

I don’t mind any topic of discussion happening on here but again as I said in my original forum post, “play nice.” If you’re being critical then be critical, if you don’t like something then say so, if you love something then tell us.

I’d rather you say what you think, but a lot of people that read negative threads will take it as perhaps; being aggressive, bashing the company/individuals, unneeded criticism, trying to bait a response from staff members, being antagonistic for the sake of it, spamming, being overtly argumentative or a whole host of other behaviours. They may deem this to be inappropriate for the forum, hence your post (in this case) getting flagged.

If we all keep it constructive I’m sure the other members of the forum are not going to have an issue. The idea behind this forum is to better connect with the fans and supporters and to help make the new TeamSpeak (as well as TS3 and the TeamSpeak server) as good as they all can be. But we can only get there if we’re all on the same team, so once more: play nice.