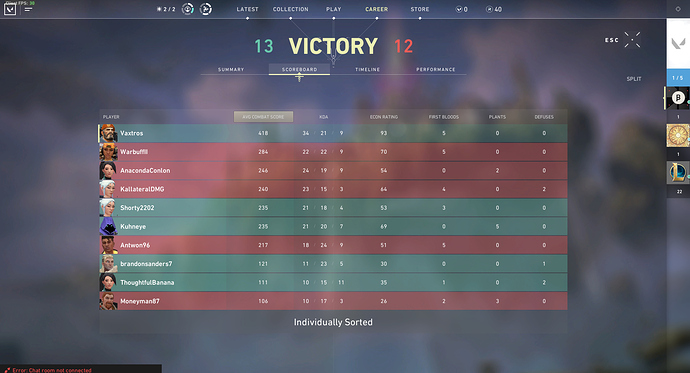 We are, and damn good drops mate

Well got already a 6k

But yeah, this game is really enjoyable. 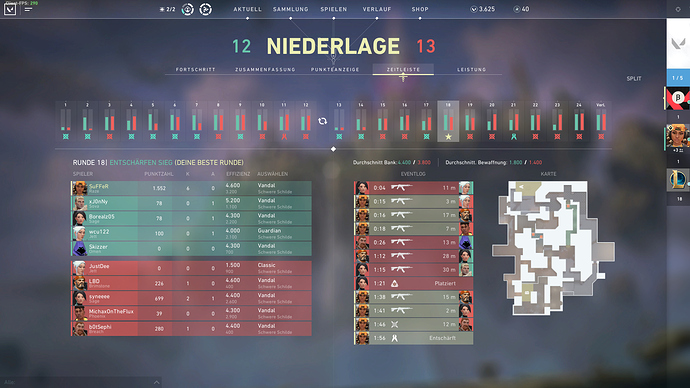 I really like the concept and the implementation but unless there is some sort of ranked system I guess I won’t play that much…
Unless you play full queue most of the times you get some LoL players in your team with the crosshair placement of a potato while having no headphones, game-sense or whatsoever…
But mostly the enemies are just as bad. Just occasionally you get some (wannabe) ex CS:GO pro just denying everyone.
So as long as there is not something like a ranked system I’ma mostly stick with CS.

Edit:
And the game is horribly optimized. No matter the hardware / software configuration I can’t really get over 180 fps ingame (up to 600 in menus) and the textures never really look that good. Spamming the inspect key on vandal e.g. makes it look like you are playing hot potato with the weapon…

But don’t forget that the game is still in the beta phase. It has now been released 10 days ago, and they can’t just release a rank system within the first 1/2 weeks of a closed beta, where the primary purpose is to find bugs and exploits or something like that. But it has already been said by Riot that they want to release the competitive mode after 2/3 weeks of the beta.

That will never keep up with Counter Strike

I think it will definitly co exist like Dota 2 and LoL, but the competitive between Valorant and CSGO will surely push CSGO forward

I saw someone call it CS:GOverwatch and haven’t stopped thinking of that all day.

i dont recommened to play valorant becouse their anticheat is very bad , and open a backdoor …
just chech it on google… vgk.sys… and it was also confirmed that.
and they want to bring it into their all games.
for me, data security is the most important

(thats why i use ts instead of dc

becouse their anticheat is very bad

I really can’t agree with this!
Yes, there are ways to pass the anticheat but compared to most other multiplayer games it is really hard and mostly detected and banned. I mean just look at GTA V e.g. You like can’t find a lobby without a cheater ever. More competitive games are better Valves VAC is still a joke though. Praised for machine learning and all that shit and still spinnbotters in high elo / trustfactor matches…
I personally did not encounter any cheater in Valorant this far and I played a lot - got my drop a few hours after release!

and open a backdoor

Yes! I feel like this is a serious problem. But not because of any backdoor thingy… It is a driver that runs directly on the kernel. This is good to detect cheats but horrible for data security as it technically can see everything in RAM / Cache. They say themselves that the driver is not communicating with their servers. I wouldn’t trust them with this… If a cheat is detected the client will perform the ban?? This makes absolutely no sense! So you could just block all communication from the driver to the internet - maybe via a secure proxy that only allows specified traffic. However I don’t feel like this is a bit overkill.
A simpler way would be to just run valorant inside a VM.

ts instead of dc

This is something completely different imo. This is about using potentially insecure servers that you have no controll over. (This is only a problem because DC is chinese… Or does anyone complain Skype collecting data from their customers)… No one cares about american companies collecting data but the chinese!!1! But TeamSpeak solves this all together as you can just self host (If you are using hosting providers it is more or less the same like DC…)

TL;DR
MY opinion:
Valorant anticheat is pretty good compared to the rest of the industry.
vgk.sys is not a great threat!
Use proxy or VM to be safe.
TeamSpeak is great.

Its ok, I agree with you