Cannot see all the server groups

The teamspeak i am using had a wipe and we had to recreate all the server groups. Before the wipe even if you did not have permission to add someone to a server group you could still view it in the server groups tab as a greyed out rank. Now it doesn’t show up at all. I am wondering how i can have all the ranks show up in the server group tab but have the ones you are unable to add too be greyed out. I am currently using Teamspeak 3 if that makes a difference. Thanks

You can kinda do this, but this requires you to use old, unsupported TS3 Server version, as this was changed in, I believe, 3.3.2. AFAIK any newer Server (that is released after 3.3.2 requires at least 3.3.2 or newer).

Before that you were able to see unaccesible ranks and after that, you can’t do that.

But I wouldn’t reccomend you that, it’s not worth it.

The TS3 client will still show you all the server groups in Permissions -> Server Groups.
It’s only the context menu entry that doesn’t show up if there aren’t any groups you can assign to / remove from the selected user. If there are any only those you can set / remove are displayed in the context menu.
This makes it much cleaner for users that (like the vast majority most likely) on most servers cannot set server groups. And if you have a few you can set, what is the point of having a cluttered menu with all the groups that takes up half (or more) of your screen, where you have to take forever to find the few you can set.

moved by moderator. a forum search and you would have found what you are asking here

I’m having a doubt, I used TS3 a long time ago, let’s say years.

Previously I was able to create several groups on the server and channel, all users were able to view the groups, but they did not have access, only when a user with group/permission placed the groups for him and thus released others.

For example, on my server, everyone is marked as REGISTER ME, but they cannot view any group on the server, even if they do not have access to the groups I would like to show them.

Only after a user adds him to the REGISTERED group does he release the groups for him, then he can add new groups to him.

Would that still be possible? Which setting should I change?

You can set that in group permissions.

Edit: Ignore my settings, the settings in the picture will not mean that you should do that.

Yes, I have already tested these options, it does not work.

What do you mean?
What exactly are you trying to do? 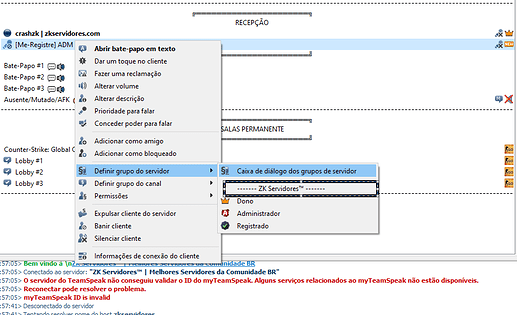 As you can see I am creating groups on the server, and separating them by names, I would like to leave this name/group inaccessible.

That is, all users would see the group but cannot add it to their user.

[EDIT]
When I connect with a new user, it doesn’t show any groups in case, until I get a group. In this case, I would like to show all groups to new users, even if they do not have access. So they can see what groups they have on the server.

By an update (I don’t know the version right now) you have to set in your own client settings if you can see all server groups or only server groups you can assign to yourself.

Thanks for the help, as far as I could see it’s the latest versions of TS3 that changed this, as quoted by @TS.ChrisR above.

I honestly liked it when it showed all groups, even if users didn’t have access to them, so they could know which ones you have and which one to request registration.

In any case, from what I understand, if you want this, I need to edit one of my groups, registry for example, so that they can put groups in themselves, and the visual groups - without permissions - put access to add it less than the permissions of the registry group .

I’ll try here and come back if I have any more questions, for now thank you all.

Another question, is there still a way to create groups just to use as a separator but leave them inaccessible to all users? 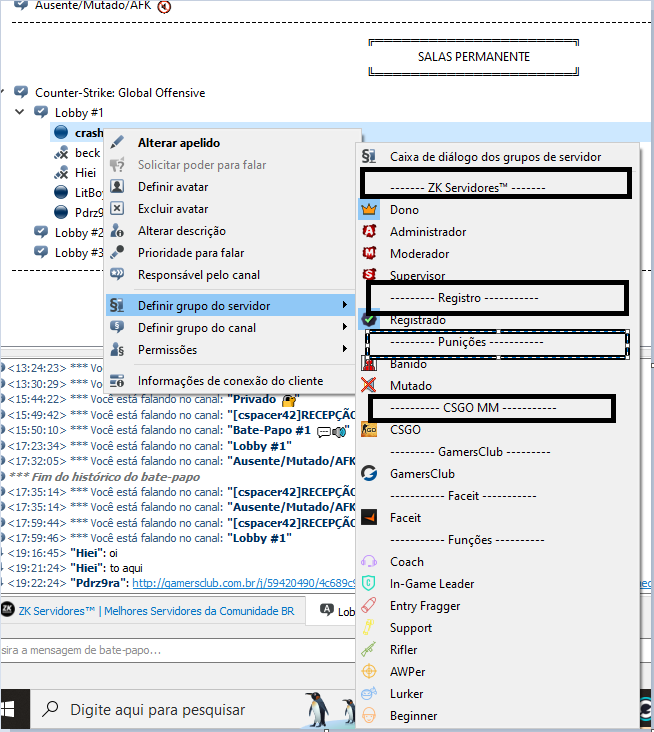 As you can see in the print I already made the groups, but I would like to make it inaccessible to all users, use it just to separate the groups.

It would be possible?

No. What you call spacer are still groups and as long user can not grant groups, they will not see them.

Okay, would there be any way to make the group accessible, but even if the user tries to add a permission error? In chaos only Server Admin could add.

. There is no gray zone for this.

as long user can not grant groups, they will not see them.