I was wondering if it was possible to setup a specific client his ban permissions and Immunity.

So I want to setup a specific client his permissions.
So that that client can ban everyone even with server admin style perm roles and that he cannot be banned.

Hello, you can only change permissions for a client from TS3 client. 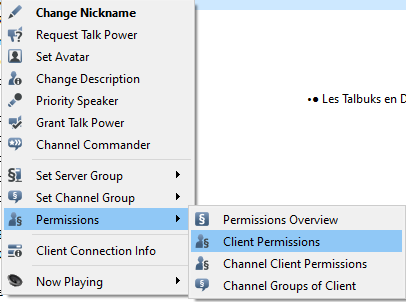 Yes, And can I also set it up so he can also ban people with permission powers like server admin group?

By default server admins cannot be banned at all, no matter what.
You’d have to remove their ban immunity first (b_client_ignore_bans), after which they can be banned by anyone with enough ban power, which by default includes server admins. So if you do this without changing anything else, any server admin can ban any other server admin, including themselves.

If server admins do not take care when creating nickname bans or ip bans for example, it would be possible to ban every user from ever entering the server, at which point only the server hoster could fix it.

Thanks for the detailed information you helped me out.