Been using TeamSpeak for about a decade now and finally about two months ago decided to share my personal theme with other users via the myteamspeak add-on site. First time I’m publishing an add-on of any sort on the site. Normally host things myself or via GitHub.

I’ve made sure that all conventions for the add-on are followed, things are documented and everything else is in order.

However, even after publishing the style add-on in November of 2019 it still remains in the review process. I thought that this was due to the winter period and all but we’re past that now and it shouldn’t be too difficult to check a few CSS files for malicious content. Same goes for the package itself.

My question now being; how can I get the add-on out of review hell? Seems like it’s only going to sit there longer and I really want to finally have it published so I can share it with the community in a feature post. It doesn’t seem like there’s an adequate contact option for the add-on process and I am not sure if certain community members or developers/employees of TeamSpeak verify these.

For those wondering what I am trying to officially publish: The first is my personal TeamSpeak theme and the second is the Hivecom community theme. Wanted to make both of these available because I find they’re on par with other high quality themes out there and surely someone else might want to use them as well

Here’s a preview of both themes for those wanting a quick look in advance. 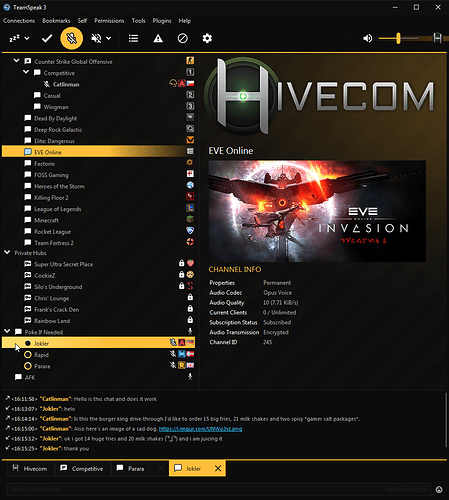 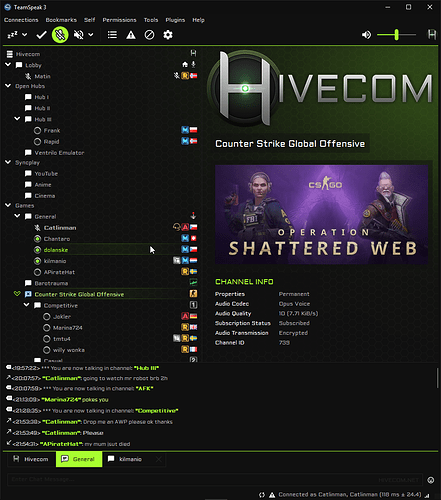 Furthermore, for folks in the Hivecom community it makes it a lot easier to install and use the theme, if it’s synced with their TeamSpeak identity via myteamspeak.

If anyone has some information on how I can get things reviewed and published faster, I’d be extremely grateful!

As far as I know the addon process is currently on hold, since there have been posts about being in review for months for a few months now.

As @D0mm4S already suggested, the review process seems to be on hold, due to a shifted focus on the new TeamSpeak client, according to NiceKype on the (legacy) forum, who opened a ticket directly to TeamSpeak support:
https://forum.teamspeak.com/threads/128874-quot-Status-REVIEW-quot-how-long-does-it-take?p=477840#post477840

In my opinion it’s an unfortunate situation, but not entirely incomprehensible. According to statements from TeamSpeak staff, reviewers apparently have to sift through a lot of bad add-ons.

In my eyes, myTS appears more like a unloved stepchild, than a vital part of the TeamSpeak “economy”. A couple of people suggested a long time ago some improvements to the platforms, in terms of transparency, the submission process, et cetera, but nothing ever happened.

You created some nice, clean looking skins by the way.

Edit: At least pushing an update on myTS doesn’t remove the listing from the main page any more.

I guess since Ts5 is out in beta now they are rather focusing their manpower on working and developing the Ts5 fully that’s why its on hold.

They both look very neat and it’s a shame that they are stuck in review.

…as you described, it brings a new life compared to the default design.
Also they approved your theme yesterday.

They both look very neat and it’s a shame that they are stuck in review.

It was approved yesterday. It was submitted before the cut off date.

Thanks for the replies everyone! Just checked and it is in fact up on the site. Didn’t expect to see that today. I’ll be damned.

Glad to hear you like the themes! Going to open up threads for both themes so that they’re official on the forum!

As @Brady_The mentioned, with the new shift in focus towards the new TeamSpeak 5 client it makes a lot of sense for them to drop active oversight on the old client. I assumed that it had to do with this when I noticed it being stuck unusually long in the review queue. Still at the end of the day having worked in the field of software development and community oversight, even having a community verified queue of add-ons instead of completely dropping add-on support would go a long way. Having one person handling community interaction as a representative and then once every week sifting through the add-on verification process doesn’t seem like a ridiculously difficult or impossible task. You can gladly correct me if I am wrong.

Going from the standpoint that not everyone using TeamSpeak has access to the new testing client or even wants to use the new client, leaving the community out of the loop seems less than ideal. Especially if this is one of the things the new client and policies are working towards. It’s evident that TeamSpeak as a whole has adopted a PR shift over the last year or two that comes far too late when tackling that of its competitors, primarily Discord. If you want to compete and rebrand your identity around Tim-Speak and push forward the idea that the developers are listening then this is a complete bass-ackwards move.

As many here will probably agree, it’s primarily the communities built around TeamSpeak that bring in new users right now and those are all using TeamSpeak 3 as there is no alternative client at the moment. Even when the alternative comes around, people will still use the old client and develop for it inevitably.

I’m thinking about add-ons like those of the likes of ACRE for ARMA and such. I can’t see those coming to the new client any time soon and so even with the new client out, people will have to stick to the old one in some cases.

A little segue into the new client; personally even with it coming out I will still be using the old native client over one with a web backend. I completely support the development on the new client as it brings in a great alternative for newcomers to TeamSpeak. Pointing folks to a web client is far easier than having them install a client plus cross platform support is unified. I am assuming this is the grand goal of the new client seeing the shift towards adopting features users of TeamSpeak’s competitors have taken for granted.

Even so, I’d personally wish that TeamSpeak recognized that it’ll be splitting users between two platforms. Still excited for what they have in store and how things will play out though!

Wanted to give you a special thanks by the way for making DarkenTS Style!

Was using it for about a year between my own themes since my first one broke ages ago. Was a nice alternative to have in the meantime and finally gave me some insight into theming the chat colors when that became a feature. Thanks again!