Could be a setting on the client or on the server so the user if he want can see what server groups are there ( it would be useful if e.g. a user want a game icon and see what he can choose from).

The server I manage also used the inaccessible groups being grayed out but visible as a way to organize groups in combination with i_group_sort_id for the "Set Server Group right click context menu. Now admins have a harder time quickly finding the needed tag since the list is all blended together.

Example of our group headers (note screenshot is from server groups window): 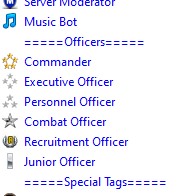 It would be great to have this feature back, or possibly add a group type for headers or a permission to make a group exempt from being hidden.

edit note: clarified the suggestion/feedback is for the right click “Set Server Group” menu on a user.

I realize this may not be done, but I 2nd this suggestion.
I run a gaming community, & prior to this latest client update, I utilized the “grey” server groups to allow for the server groups of my server to be organized & it allowed my community staff/ managers to find them easier.
Ex: They have to assign someone to a command staff group? Group is under “Administration/ Command”, etc.

As it is, it forces us to have to leave the group open to be added to someone or not.

I think bringing this back in some form, perhaps like Para mentioned as a permission, would be helpful. Otherwise the only alternative for sorting groups on larger servers with hundreds of groups is to make spacer groups assignable, and that is a bit of a hacky way to go about this, especially if you don’t want people assigning spacer groups.

It is merely a workaround which users came up with because TeamSpeak for the longest time failed to improve the user experience of their aging product until they realized that it’s too late and they needed to build a new user experience from scratch.

Organizing server groups in categories / folders / whatever would be the way to go here but it needs to be done in a way which won’t break backwards compatibility with older clients which don’t support it, especially since some users are complaining about recent client versions changing existing features to improve compatibility with the upcoming new client generation and those users refusing to update because of that.

I imagine remaining compatible with TeamSpeak 3 being sort of a road block for new features at times because it can potentially limit the variety of new features to those which won’t cause the protocol to change in a way that TeamSpeak 3 clients would no longer be able to understand it.

I don’t know too much about the inner workings of the software these days (and I probably don’t want to) but I think I remember protocol extensions causing compatibility issues in the past where older clients would throw protocol errors when connecting to newer servers because those servers would unexpectedly send more data than those old clients expected.

Anyhow, solving an UI usability issue by adding a new permission which isn’t even a permission is definitely a horrible idea from a software development point of view and definitely doesn’t make for a good quality software product.

I can only hope that none of you who seriously suggest dirty hacks like that are in charge of actually developing software. In some companies, that would probably get you fired.

You’re not wrong, but a completely redesigned UI I think is a bit of a pipe dream right now until the TeamSpeak 5 client is done, so I think restoring the previously had functionality at a bare minimum would be sufficient for the short term.