Suggestions or just a brainstorm about text channels 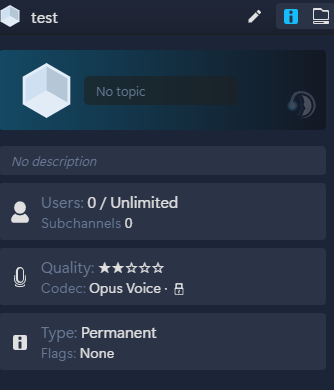 In the image we see a voice channel that could actually be just a text channel with server conduct rules or any other text, without showing anything other than the channel description, but there is no creation of text channels. (I’m not talking about channels that allow text chatting, as that already exists)

But the idea, in my opinion, is not having to create a voice channel, with audio codec, user limit, etc… It could be a much lighter text channel, with practically nothing, just a more programmable description or open to code (basic HTML, advanced MARKDOWN) I don’t know, something like that.

I really prefer to see something totally new (or not, it can be copies of other programs, whatever) or it can be something existing, but with our face (TS).

The point is, can we or should we bring something totally new or improved from TeamSpeak3, that’s the idea in my opinion.

I also know that releasing codes in the description of a channel in TS5, can bring loopholes, etc… But that’s what we’re there for, finding bugs, reporting and fixing them, right? Let’s go.

Forgive me if a similar topic has already been created, I searched and didn’t find anything current. I just want to help improve my TeamSpeak5, I think that if each user gives their suggestion for improvements and innovations, we will have a much better program.
The union, understanding and respect of all is what really matters.
The TeamSpeak program throughout its journey has brought us many joys, friends, maybe it even helped form couples (boyfriends)

It’s only fair that we repay now with suggestions so that in the future we have a voice program created by and for its users, not deceiving or sucking its users, charging to have simple functions such as a personalized link to connect to your server, just looking for the money, like other programs do out there.