Hi,
I am experiencing an issue with this update when TeamSpeak is creating enormous log files full of WebSockets Server created but failed to start lines.

This causes the system eventuali to run out of disk space. 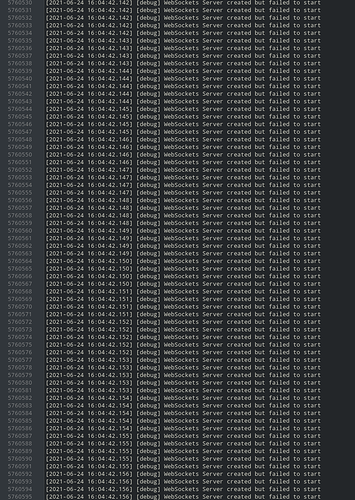 It’s known that when the client was stopped with the updater that it can happen that the web socket part wasn’t closed, stopped etc. but a client restart should fix this.

You had that more than once after client restart? OR it did not end after some minutes with “WebSockets Server created successfully”

AN OPTION is to turn off Debug logging in the Dev settings. This is only needed for Debugging and not the normal use out there.

Client restart probably worked because I don’t have the issue currently. But I don’t think that it is the solution. I looked at it in more detail and it is not probably related to the latest update. I have found that I have 3 large log files (each around 14G) that were around 2 weeks old which eventually chewed up around 50GB of SSD space.

So yes it is possible that those 3 files were generated after TeamSpeak updates and restarts by the updater. It would fit pretty well since I am using TeamSpeak daily and only those log files were bloated.

I would say that it did not stop after a minute… all log files that I checked yesterday were full of this message until the end without any success message. And since they were 14GB+ I would say that it must have been running for more than a couple of minutes. I don’t have them anymore because my system ran out of disk space and crashed and in my attempt to fix my PC running with zero disk space I deleted all of them.

But I have one smaller (117M) that also has those logs. Here is the screenshot of the beginning and end of that file… As you can see it started right away and did not end until the application was probably somehow killed.

Option to disable debug logging is a nice hotfix but I think that problem is in underlaying behavior of repeating WebSocket Server creation without any delay or timeout. This may eventually be intensive on other resources like the CPU. Also, I think that the behavior of generating gigabytes of logs is not wanted even in debug logger, and the experience of running out of disk space to zero is also not really user-friendly. Maybe some policy on maximum log file size may be a universal solution since I think that no log file should need to be gigabytes in size.

But I don’t think that it is the solution

No. The solution is that we find out why this happens.
But meanwhile you should not log Debug as long no Staff asks you for such log.