Its all said in the title, please help!

Have them try tweaking their capture settings & check your playback settings too.

HOPE THEY FIX IT FAST! it is so annoying

Hi there,
so like an hour ago me and my friend updatet to the new 3.5 version of TS3 and instantly after joining the server again realized, that the sound quality got WAY worse. We both tried around with the new settings, but didnt get any decent results so far, so we reverted back to the old 3.3.2, and the sound was fine again. Are these issues there for everyone else or is it just our inability to tweak the settings right?
Would be nice to know if anyone else has noticed a drop in quality.
Kind regards and thanks in advance!

I try to explain what you experience now in this update.

Yes we made changed how audio behaves.
We already did this in TeamSpeak client version 5 or TS 3.5.0 and got the same feedback where the TS3 3.3.2 client could not hear users with newer versions as loud as before.

In older client there was no AGC (Automatic Gain Control) in playback. It was in Capture instead and the client raised or lowered the captured audio before it was send to the server.
The problem here was that there was no way to put each user your here to same loudness. So you had to adjust each user’s volume manually when he did not setup his microphone correctly or had a bad one.

So we moved that feature into playback of audio instead and made that possible. So any audio you get now get’s raised or lowered instead to get everyone on the audio volume you did set in the client.
Yes this can also have an effect on the quality of the speaking user when his volume from the microphone is way to low in his settings.

Now when there is still a user who hasn’t updated yet to TS 3.5 then he will hear you as you did send it to the server without the client modifying your volume.

For music bots we have an idea how to solve this in an client update.

You can temporary disable AGC in case you don’t talk to other users.
Your audio experience will get worse when others speak to you.

Version 3.5.0 crashes instantly on Linux with a Segmentation Fault. I tried submitting the error report, but the error reporter always tells me that the policy is expired or something. Please fix this, I’ve been using TeamSpeak for many years on Linux and I would hate it, if this was the end of proper Linux support. As of right now, I’ve downgraded to 3.3.2, which works perfectly.

okay its really useless, Teamspeak was very good like that since AGC its become anything people’s sounds are either very very loud or very very low out with the old version no problem with the audio so AGC destroys Teamspeak audio.

does anyone know how to fix Error: 201

Version 3.5.0 is simply a complete disaster. Developer what did you do with the sound quality? That sounds like a rat is on the line. First installed 3.3.2 again. Repairs the shit, quickly.

Why did you make this that if you cant give some server groups they disappear from server group menu, now every TS3 owner/technician needs to rework server groups

. And the text goes on server groups icons, please fix this. For now i need to use older teamspeak 3 version, thanks <3 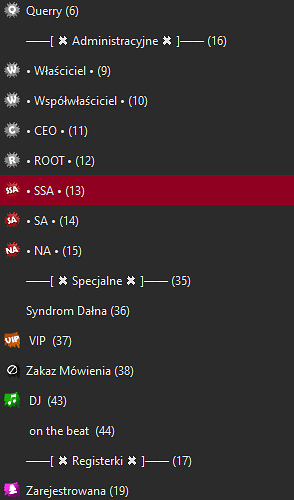 So the new update seems to make users sound better, not sure why as the changelog didn’t list anything about it. Edit: I read the above posts

Also, anyone having issues setting channels to anything other than Opus

To me it seemed to get better when every client on the server was on 3.5.0
for anyone on other versions the results were a bit weird

As to your statement (the one you haven’t stroke), please do not use anything but Opus. Other codecs are out of date and were ditched some time ago.

Hi, thanks for the reply
I am aware Opus is best, but I was switching codecs just to compare and whilst the other options are viable they can’t be set. I think it might be a bug

the same here. pretty default Win 10 1909 installation. After update to new 3.5 or reinstalling to 3.5, I couldn’t figure out how to start the client. It instantly crashes.

cleaning the cache folder solved it also for me.

This is not a bug. Well, kinda

It’s an oversight to be precise.

Whilst other codecs are in client (somewhat, probably because Devs haven’t deleted text related to them), server wise there are only Opus Voice and Opus Music codecs. As I stated above, CELT and Speex were ditched cause they’re out of date for today’s standards.

Edit:
Or maybe they haven’t deleted these text just because there always could be some server not upgraded to latest version which still uses CELT/Speex… I would bet that than the other.

Hi guys, can anybody tell me the build number of this?

I want to force all my server visitors to update to 3.5.0 because if everybody is on the new client, the audio volume issues are gone.

Then I serveredit b_virtualserver_modify_min_client_version=1584614261 however on reconnect there will be no prompt to update the client.

After the serveredit command it get a error id=0 msg=ok response.

Anybody knows what I’m doing wrong?