A post was merged into an existing topic: Radio FX no longer working

Can you please change the audio changes back too before 3.5.0. The current audio is so off and even with Automatic voice volume leveling toggled on and off the audio seems to constantly fluctuate. Never had audio issues before this update.

Can you please update the installer on the website?
Some of us have net problems so i have to send them the installer.

I dont know what it is that you did in 3.5 but its a dumpsterfire of an update. Clearly you must’ve done more than simply moving the same AGC from sending to receiving, because half the people that I talk with now sound like complete garbage despite being on 3.5 themselves (eventho you claimed everyone being on 3.5 would fix the “Issues”), and you just straight up disabling AGC for music channels shows how you didnt think this trough at all.

I dont know why you felt the urge to touch this to begin with when everyone got used to how it is and why you didnt make it an opt in thing. I am not alone with this, having tweeted it out and received pretty much the same feedback. Either people sound similar, or they sound like they’re on a 50db boost with a heavy compressor. Its atrocious.

You trying to make TS more like Shitcord is what eventually will end up driving people away from TS as we know and love it, and this is one of those updates. I can only urge you to revert this while the damage isnt permanent.

Could anyone please give us following details from you and at least one (more is better) other user you have problems with? When we know some settings we can try to setup our systems the way you do and we may see the problem.

A post was split to a new topic: Only allow server access to newer clients with active myTS

AGC is now disabled when someone in a channel where Codec “Opus music” set sends Voice/Music to your client.
This is not very good, because on our TeamSpeak server all channels are “Opus music” for the best quality. Now the feature is complete useless, but the music/voice still sounds not as good as before, even if it’s disabled.

Have you tried clearing the cache or using -safemode as start parameter (see below)?

For anyone with a client crash on start. We can not reproduce this yet but it could be that clearing the cache folder may fix the issue. You can find the cache folder under following paths. Windows %appdata%/TS3client/cache Linux home/.ts3client/cache Note: You may get error about icons can not load or was not found when you connect to server. This is not an issue with the client. The server does not have file transfer enabled or the file transfer got blocked or the icons got delet…

Anyone who is has a crash on start please try start parameter -safemode . This will disable plugins and the client may be usable again. Now you can remove 3rd party plugins and maybe the client won’t crash when you remove the parameter again.

On Windows make a right-click on the shortcut you usually would use to start the client and then select properties. Then add the parameter as shown. 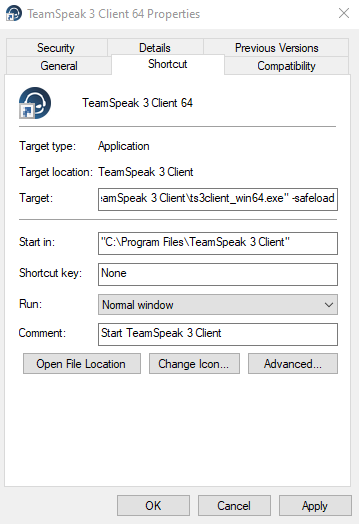 Linux/Windows users can add this parameter into the console in case they start the client that way.

Please upload your crash dump somewhere and send it into this thread.

Thanks. Tryed with -safeload but did not help.
Still crashing on startup.
How can i post my log and crashdump?

Please following all of my post! There is not just the -safemode thing.

Hello, people from my community have told me that their push-to-talk no longer works

That’s all detail you have?
Please give us some details about used operation system and device they have their ptt key set.

the problem seems to arise on Mac

OK? will test that in a moment and will report it that did not work.

For global hotkeys, you need to enable a setting in the Mac system preferences.

(when list does not offer the + button then try to start the app from application folder.)

thank you i pass it on until you see your side

Ok. i cleared my cache also and started with -safeload. still crashing on startup. i cannot do anything, because i dont’t even see the client. So i cannot change any options. Installing 3.3.2 works fine

That attached zip broken.
the crashdump is missing and only a log seems to be included.

@Karazhan
Tested it and works as long i allow it in Mac Os preferences.