We released a minor update to fix some crashes.

The client will search for the update on it’s own. But you can also trigger that process when you open
Help and then click on Check for Updates .

That’s it for today

Are there any Informations about the bugs / crashes?

Does it fix the audio spike/supress issue we are facing in Opus Music Codec channels? It would be very nice.

Are there any Information about the bugs / crashes?

They where rare but did exist.

They all where rare but could happen when

Does it fix the audio spike/suppress issue we are facing in Opus Music Codec channels? It would be very nice.

Please read the change log. It says what was fixed.

The report in thread 3.5.1 does not make really sense to us.
There is no AGC in client active when sending client (3.5.1/2) is in a channel where Opus Music is active and all listener also have 3.5.1/2.
Whatever raises or lowers the volume is from senders driver or software he uses.

Will this update fix this issue? Issue report: whisper cutoff

I still have AGC on capture side audible in Settings / Capture / Voice Activity Detection and while talking in a channel. Automatic voice volume leveling (Settings / Playback) is deactivated.

Using a modmic and a Behringer Xenyx302 USB.
There is no AGC setting in driver config. Never had AGC before until updating Teamspeak to 3.5.x.

There is no AGC audible in Windows Audio recorder or any other recording Software using the same microphone. So i doubt a faulty driver is the reason.

Talking with many users in a channel is nearly impossible, because the difference in volume between two users is sometimes up to 30dB! This is much worse than discord.

I will not renew my license this year, if this will not get fixed - Always loved TS

Same for our community… All people still reporting the same issues I posted here: TeamSpeak 3 Client 3.5.1

I have personal settings for some people from -26 to +20dB and some ppl are still too quiet or too loud… It’s just completely messed up. On the old TS version nobody had any problems.

Thinking of urging my community to downgrade back to 3.3.x

just tell you users to need to update thier clients to 3.5.x and dont use older versions…
differences is the problem… 3.5.0 is a big update and many thing changed

This is not true. I have forced all users to have minimum 3.5.x through my server config… Since 3.5.x most of them are reporting issues.

We are all on the same (newest) version. This is not the problem. We are using Teamspeak since 2002. Some of us even are audio engineers. AGC is still clearly audible on the SENDING side. Its not audible in other audio programs, so its unlikely that the reason is a driver problem.

And yes, I know the difference between Auto Volume Leveling in playback and Auto Gain Control in capture. Its totally clear why its a bad idea to mix both when using different versions.

Please atleast allow people to provide information to help fix this AGC problem, it is very annoying and we just want to get it fixed. Everyone on my server is on the newest version, we tried having the new settings off, we tried having it on, and all possible combinations. Something is either broken, or settings are just not clear enough about what they do. Even if everything is fine on the technical side, many people are complaining so something still needs to be done. 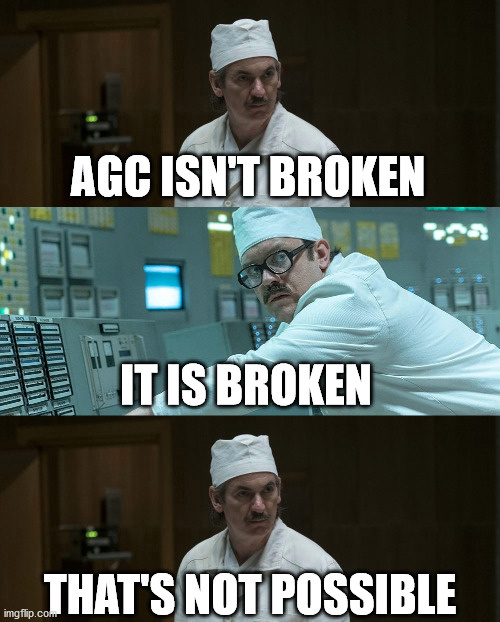 This is actually ridiculous. This whole AGC system is makin me mad about teamspeak and considering using something different. Especially with better mic’s that volume output is jumping to nonsense numbers and its uncomfortable to hear for others… I’v tried all u guys saying but nothing works and still makes me use older teamspeak instead to not damage my friends hearing. Same goes for me, when someone comes with new teamspeak update, he instantly goes from 0db to -20…

The AGC is significantly broken, people aren’t stupid, please stop denying the issue but start researching it.
People jump from being very silent to suddenly being very loud, without any changes. Some people complain about distortion/clipping because the microphone is so loud (= it’s played back so loud) and other complain about low volume. For the same person at the same time! With up to date versions of client and server, it’s not like we didn’t try to fix the problem and updated everything.

Me and my friends liked Teamspeak because it was good at what it’s supposed to do: Voice Chat. Now even this feature is significantly broken, so much in fact that we’re using Discord at the moment. Discord is overloaded, ressource intensive, tracks you etc. etc. but at least it’s core feature works well which you can’t say about Teamspeak right now. And that opinion comes from someone who put a lot of time into developing one of the most popular plugins for TS3: RP Soundboard (which btw. keeps a lot of people still on TS3 instead of going to Discord).

If you really want to bleed even more of your userbase: go ahead and release updates with broken features that nobody asked for and then keep denying that issues exist. Way to go.

I made an account just to comment on this because it’s so outrageous.
Friends and I have been using TeamSpeak for way over a decade now, in this time we grew to a sizable community primarily relying on TS for voice comms. We are right now actively evaluating alternatives and will be migrating very soon. Permanently.
And I want this to be entirely clear, it’s not because of a simple bug but explicitly because of the frankly embarrassing and just pathetic response to it. Ignoring masses of bug reports, closing threads, downplaying and even denying the issue exists in the first place? That is beyond unacceptable.

We were worried when we heard of TS5, fearing it’s a knee jerk reaction to Discord taking ever more and more market share from TS. But after trying it ourselves and this debacle, in our eyes, it’s so much worse. The Beta is embarrassingly bad, lacking tons of features that for us always lifted TS3 above the alternatives, adding “features” nobody asked for or wanted, removing actual features and replacing them with a dumpster fire of an “update”, and all in all just shows that the TS team has no clue about what it was that held what little of their user base they still have. The world doesn’t need yet another Discord wannabe with bad audio, “modern” (web)design, a questionable at best support and dev team and yet here we are.

After the response by the official team to this bug TeamSpeak as a company and as a product is dead to me and my community and we won’t be coming back now or ever.

They don’t ignore bug reports. The TeamSpeak Staff read all posts and Reports. Most of them are too busy, but they do their best to be able to offer us a good software.

The Beta is embarrassingly bad, lacking tons of features that for us always lifted TS3 above the alternatives, adding “features” nobody asked for or wanted, removing actual features and replacing them with a dumpster fire of an “update”, and all in all just shows that the TS team has no clue about what it was that held what little of their user base they still have.

What do you expect from a beta? TeamSpeak 3 started out as a beta and the features were gradually implemented. Of course you can also contribute your ideas for the new TeamSpeak Client. They have a roadmap where you can see everything of the development.

I have problem with seeing most of other users’ avatars. Very enoying.

@TeamspeakDevs
Please fix the AGC problem. Maybe you don’t see this as a problem because you are not using the technology we use. Please test it yourself and with users and release a hotfix please. This will only cause an unnecessary shitstorm and you know you don’t want that.

maybe we will be surprised with version 3.5.3